Didier and Serge Hoflack had finished the 2015 season by the Supreme Champion of France all categories including :

The origins of the pigeons that make up the currently colony  :

In 1998, with the move to Outreau Boursin , Didier and Serge decided to start from scratch and move towards the bottom ½ of competition and cross one day.

For this contest for 300kms to 500kms , they turned to Maurice Casaert .

They quickly befriended with the master of Néchin and Serge Didier and later went to see the arrivals of national competitions regularly.

4 other blood streams were added later to extend the distance to 700kms : The Georges Bolle, the Etienne Devos, Chris Hebberecht and later Christmas Lippens . All through direct purchases.

In 2000, Serge and Didier returned home of Georges Bolle with 3 pigeons whose BOLLE BLUE ( 3001593/2000 ) . Father of the famous Mr Bergerac (1st Nat Ace Pigeon background 2006); Pigeon who later moved to the lofts of Gaby Vandenabeele famous when he became a core player in the master of Dentergem.

Seeing that great Belgian fanciers including Georges Bolle invest in pigeon Noël Lippens colony, Serge and Didier decided to do the same and in 2011, they reserve a large amount of eggs and young of the colony Aarsele .

The following year, the acquisition at Nöel Lippens already showed their potential with Elena ( National Ace Pigeon Young and representative of France at the Olympiad in Nitra 100% Lippens )

In view of the international races those Serge and Didier  which are interested more and more , they recently introduced the Gaby VANDENABEELE,  Luc VAN COPPENOLLE and Chris HEBBERECHT pigeons and some birds in Meirlaen Etienne and P. Veenstra , or Rik Cools , De Saer Rudi , Scheele, always by direct acquisitions .

The colony consists of fairly solid pigeons , pigeons a bit beefier than average, with a well-ventilated wing and special attention to the eye for reproduction.

An Important work on inbreeding is achieved ; Thus couplings cousin / cousin , half-brother / half-sister, grandfather / granddaughter and even brother and sister are made to maintain the quality of their pigeon.

Conduct of the colony :

In Boursin , each with its role : Didier deals couplings, introductions and breeding . Serge cares when its care and the contest preparations.

The colony consisted of 300 pigeons in the winter and up to 450 pigeons in full season. The pigeons are distributed as follows :

For Hoflack , ventilation is paramount, and the floor of the barn has large openings as front , as the tiles or by the ceiling lockers.

The old are played in classic widowhood , the yearling to celibacy

After playing season , widowers are separated from females in September, having spent ten days together after the last contest. From September to late February – early March, no pigeon flies around lofts . Initially the pigeons were not flying to guard hunting and works like that , and Serge Didier have decided not to fly their birds during the winter. During this period, a resting mixture is served complemented some corn seeds .

In early December, the whole colony is coupled , each traveler must raise a young and female is removed prior to a second brood . A cleaning Fitness in early April for both old and yearlings .

After one or two preparatory stages to 180 km, the pigeons are then basketed to competitions ½ background and especially for Semi-National and National races.

Young generation side, current March / April a first selection is made by hand . The youngsters do not meet the criteria set by Serge and Didier are automatically eliminated.

Young pigeon are trained up , see 3 to 4 times a week from 2 to 25kms contest. They are played on the system of the sliding door. Young females are played without restraint .

The food pattern is traditional : depurative and some corn seeds earlier in the week , widowhood mixture sports the last six meals prior to lodge. Travellers have the room to the common pan at will for 45 minutes to an hour , morning and evening. The return of the competition , it’s a mix depurative / widowhood with tea.

The pigeons are vaccinated with Colombovac earlier this year . The airways are treated early in the season as the common cold. A treatment against tricho is performed every 3 weeks during the playing season. For the rest, the pigeons are left as close to nature.

Vitamins, they are proposed in the fountain the last days before departure.

In view of the quality of the topics and motivation and Serge Didier , we can already tell you that you can count on their continued performance in the next season why not excellent performances of international .

The headlights pigeons in your colony : 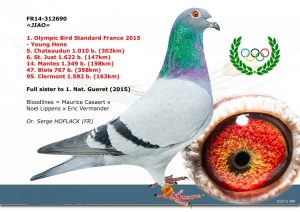 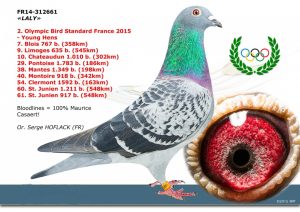 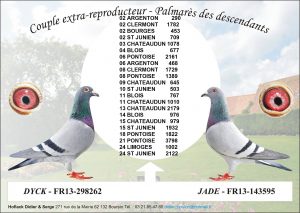 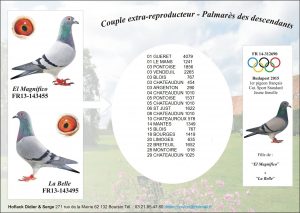